Amatus represents everything that is positive and hopeful about ATE. In less than one year, he has built a thriving business, employed two people, won a scholarship to study at University in Accra – and is planning to open a factory next year. And he’s only 19.

It could have all been very different. Seven years ago, his father died, and it was the beginning of a violent nightmare for him, his brothers and his mother. His uncle turned up and stole virtually everything they had – and gave them a few beatings along the way.

“We suffered from the beginning until now. At 12, my father passed away and my mother became a drunkard.”

With nothing to their name, and no-one else to support them, Amatus faced a terrible decision – stay in school or support his family.

He decided to do both. He did his schooling by day, and at night he took his father’s fishing gear (his father had been a fisherman) down to the river. He also took on any other work he could find – often back-breaking work like loading lorries, fit only for adults.

“I was determined to do what I want with my life, education, fishing and catering for myself and my family. When I finished junior high school and went to senior high school I was still doing the fishing to support the family, to pay school fees and still hopefully survive. It wasn’t easy, I had to go fishing at night.”

With the support of a teacher, he did well at school, particularly in Maths and Integrated Science. But there one was subject that really excited him. “I did Business at High School and want to be a businessman and help my community. When I open my factories, I can employ them.”

When he left school in 2016, his former teacher loaned him the money to start a small business making body cream, known locally as pomade. “He had seen my hard work and effort to be somebody in life –  and efforts to support others – and he wanted to help.”

The business was going ok, but with no capital to expand, and the need to repay the teacher’s loan, Amatus faced the prospect of it grinding to halt. Then, his teacher told him about BizATE grants and encouraged him apply. Amatus met up with ATE staff member Ernest and attended a workshop.  In 2018, he was awarded an ATE grant – and now he has big plans.

Amatus has done his research –the pomade market is choked down South, but in Lawra district, he’s only the one doing it. The cream is made from Vaseline, perfume, wax and oil, which are heated together to form the pomade. 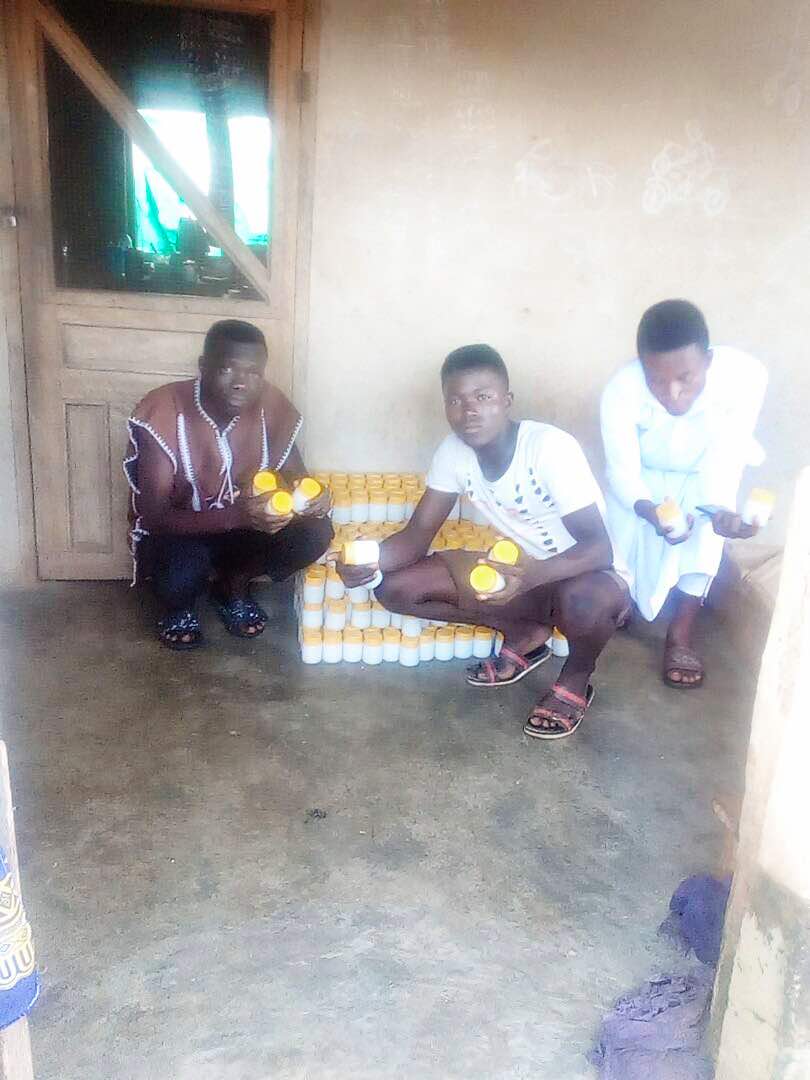 He buys 2000 empty bottles a month, and get the labels printed in Kumasi. Recently, he’s restyled the label, to include picture of a man as well as a woman – that way, he figures, he doubles his potential market.

He goes to local markets in Jirapa and Lawra, selling to individuals as well as stalls. Each jar costs about one and a half cedis to manufacture and package – and he sells them for 2 cedis, so the profit margin is tight. He travels by tro tro (ramshackle minibus, usually crammed with people), and would love his own nyabba (motorised trike) so he could go further afield.

He also employs two people to help him manufacture and sell, and they work on commission. He told them – “Come and work, and one day you will be somebody”.

At the moment, he sells more than 1000 jars a month, but intends to expand in March of next year with the opening of a small factory in Babile –  if he can save enough money. “I’ll be able to buy ingredients in bulk and get a good price – I’m good at haggling, I like getting a good deal”.

The factory could employ up to five people, and he hopes to extend the product range to include liquid soap, perfume and parazo (local stain remover). He says he’s on target with his savings.

And he’s spotted a new and potentially huge market – in nearby Burkina Faso. In July, he travelled there with 230 jars – and sold them all straight away. He already has promises of big, fast sales for when the factory is up and running. “The plan is to sell in bulk, so I can make a profit, but the stall holders can also make their profit.”

Everything Amatus has achieved is amazing enough – but the business is not the only thing going on in his life. His former teacher, who has supported him so much already, helped him apply for a scholarship, and now he’s about to head to Accra to attend university to study Business and Administration. And, even though he’ll be a 18 hour coach ride away, he still plans to keep the business going.

“I was in Wa for four months, selling the pomade village to village and I left my two employees running things here. When I got back things were going well, and they had done everything I expected them to do. So, I feel confident.”

He’ll be staying in touch by phone, and his mother will keep an eye on the business. This, in itself, is a huge deal, because after his father’s death his mother began drinking heavily. Now, Amatus says, she doesn’t drink and even goes out with a tray of the product on her head, selling door-to-door. 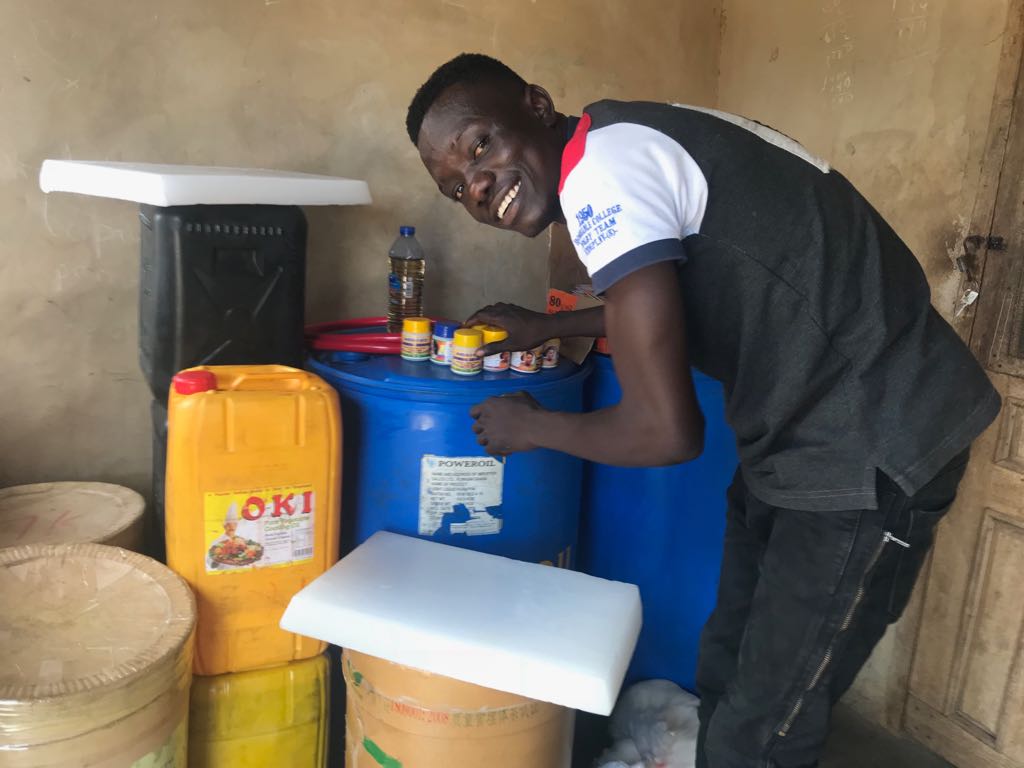 His business success has had a profound effect on the whole family. “We used to struggle to buy food, but now we can buy food from the profit. It’s brought a lot of changes, and solved a lot of problems. Those days, we used to starve ourselves, eating maybe every two days. Now, we are eating every day. We used to depend on others for help. We don’t do that anymore.

Amatus has a strong sense of how his endeavours can benefit his family. He believes his two brothers – now 9 and 11 – will do well. “They think I’m a good brother and they’re happy at the idea that they can attend university and make something of their lives.

“My mother thinks she’s been blessed to have me as a son – and she’s been saying it. I’d like to think my father would praise me for what I’m doing.”

Although there’s still much to do, it’s still a complete turnaround of fortunes. In the same month Amatus won his ATE grant, he wrote a painful and angry account – entitled ‘What Outrages Me’ – of what happened to the family when his father passed away, and it’s an insight into why he’s so determined.

It was a terrible, terrible time for Amatus. Brutal and cruel, his uncle exploited, beat and stole from them – and what happened isn’t even that rare. It could have broken Amatus – or even killed him. But somehow, it made him stronger.

He wrote his passionate and intense account when he was still very angry. Now, a year on from getting his ATE grant, he’s driven by something other than anger. “Now, I don’t have a problem with anybody. I want to solve problems, I don’t want them to continue, I want to make an impact in my community, so it makes me work hard.”

He feels particularly strongly about how families are treated when a parent dies, and knows he’s not an isolated case.  “I’ve seen in this community, if you lose your father or mother, people will try to take your property. They do it out of ignorance, and no-one is leading the fight against it. If I can be successful, I will lead the fight and try to change our society.”